For the northern half of the western hemisphere, apples carry many meanings. Apples are simple, wholesome, pastoral pleasures; they are gifts for the teacher and ingredients for the stay-at-home mother. They are also figurative temptations, irrevocably associated with Eve in the Western retelling of Genesis. Apples are a sort of ur-fruit; in many languages for quite a few centuries, the word for apple was a general term, like fruit or berry — which is why some languages have words like melanzana (apple of insanity, or eggplant) and pomme de terre (apple of the earth, or potato).

Perhaps that’s why René Magritte painted so many of them. In his surreal landscapes, apples swell to improbable sizes; they float, wear masks, or swell to improbably sizes. The temptation to anthropomorphize them is strong; one imagines that the apples have intent, as they seem to stroll and converse and willfully take up space. And of course, one wants to read them as symbols: Magritte frequently flirts with symbolic readings with his lyrical titles, but then vexes a simple interpretation both within the painting itself and withing the larger corpus of his apple paintings.

For this weird little playlist, I’ve paired songs about apples with paintings by Magritte. No reason, no overarching narrative theme here–just enjoying loads of apple art during the peak of apple season, before I get sick of them.

You remember Deee-lite from the one-hit wonder “Groove is in the Heart.” This similarly playful, catchy song murmurs about the apple-y sweetness of kissing.

I couple this song with “The Married Priest” (1951), which depicts two pink-masked apples canoodling on a moonlit beach. Not to be confused with a different painting titled “The Married Priest,” which a single blue-masked apple hanging out in the shade of an old wall, or “The Hesitation Waltz” (1950) which depicts two apples wearing red and blue masks on a sunlit beach. I choose this version because these apples appear to be having a romantic assignation; cheek to cheek, they may be kissing or whispering. Besides, I have this version (with pink masks and moonlight) tattooed on my right shoulderblade, for reasons that are far too complicated to explain in a short space.

This song makes an explicit connection between the apple and Eve: here, the apple gave Eve enough knowledge to be a destructive force but not enough to use the knowledge wisely. Eve and her apple cider and wine swindle the song’s narrator for everything he’s got, although he pleads with her to leave… er… the one thing he has that she doesn’t.

Because of this allusion, I matched this song with the Magritte painting that makes a similarly explicit connection to the Genesis story. Probably the most well-known Magritte painting thanks to The Thomas Crown Affair, “The Son of Man” (1964) depicts a man in a modern suit and bowler hat with his face obscured by a big leafy green apple. Due to the title, it’s tempting to read this painting as a comment on the biblical tale; Lou Reed’s nefarious Eve is nowhere to be seen, and as the central figure of this composition, the Son of Man seems to take the brunt of both responsibility and punishment.

But then, Magritte painted the bowler-hatted man with an obscured face almost as often as he painted apples, so the Biblical allusion is only a piece of the story it tells.

In this song, the image of an “apple bed” follows some spooky imagery and a yearning plea; I’ve always imagined it as a hunger for comfort or pleasure, which (as in many Sparklehorse songs) seem to be out of reach beyond a dark veil of depression.

I pair this languid, moody song with “The Listening Room” (1952), which depicts an enormous green apple which is taking up an entire room. There are a few different versions of this painting: I’ve seen one with a pastoral landscape outside rather than the sea, and another with blank stone walls rather than the cozy pink interior. But I like this version because of the contrast between what should be a pleasant room and the complete wrongness of the giant apple inside. To me, this enormous apple suggests the suffocating weight of depression, in which even things that should be good for you feel like they may crush you or swallow you whole. 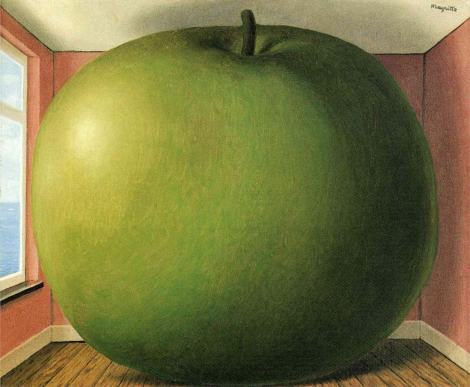 Arcade Fire, “My Heart is an Apple”

An odd, slippery song that seems to have two different voices in it. The male voice sings self-deprecatingly about being full of shit and treating someone he loves badly; then the female voice comes in very high and delicate, singing “My mouth is full, your heart is an apple” which seems to suggest the reverse: perhaps she is consuming him, or making a feast of his feelings. In the lyricsI read, the percussive verbalization toward the end of the song is transcribed puntastically as “Pomme-pomme-pomme-pomme-pomme-pomme-pomme-pomme.”

This difficult-to-pin-down song seems well-suited to “Ceci n’est pas une pomme” (1964). Like the famous pipe of “The Treachery of Images,” this apple is rendered in hyperrealistic detail and floats in an empty space. You look at it and think, this is an apple; the painting corrects you, saying that it is not. Of course it’s not an apple, it’s a painting. But it’s a painting that begs to be seen as an apple, and it seems a bit unfair to have your perception tweaked this way.

At one time, my dissertation began with an in-depth description of this painting. I later abandoned any references to art–along with my former gnarled and obscure style of writing, thank goodness!–but I still frequently imagine these paintings when I mull over literary food imagery. It’s about time they found a home on my blog.