I’m experiencing some synchronicity with work by the artist Wayne Thiebaud, whose paintings seem to be adjacent to a number of my research interests. I came across a tantalizing description in The Culinary Imagination, where Sandra Gilbert notes that the cakes in Thiebaud’s Cakes are as “sensually tactile as they are abstractly geometric.” Then in the Whitney tour I linked awhile ago, the curator describes Thiebaud’s Pie Counter as having “thick, luscious strokes so that it resembles frosting or cream.” Later, I picked up a pack of Thiebaud postcards at an art museum in another city, and marveled that he painted human bodies, flowers, and buildings in the same style.

Wayne Thiebaud is an American artist best known for his paintings in the 1960s and 1970s; obviously I am most familiar with his paintings of food. Thiebaud’s neat rows of nearly identical dishes always seemed to me both entirely of his era yet at odds with some of the prevalent aesthetics of the time. The pastels are eye-catching and appealing, yet more cool and subdued than the highly saturated hues employed by many Pop artists. The repetitive patterns and geometric shapes seem to speak both to the formalism of Thiebaud’s Minimalist contemporaries and the modes of mass production that preoccupied Pop art, but the little dishes are varied just enough to tease the eye and to allude to the human hand that painted them.

But having mainly seen the paintings on the web or on the printed page, I never realized just how tactile the paintings are. In two dimensions, the cool receding colors make the painting look smooth and slick, like an illustrated advertisement in a midcentury magazine. Now that I have seen a Thiebaud painting up close in person (as part of the Philadelphia Art Museum’s International Pop exhibit), I can attest that the paint does look like icing and is far more suggestive of movement than I knew. The plated food is rendered in great whorls and broad blocky strokes of paint, and even the wide neutral planes of wall and countertop are rippling with brushstrokes.

Since we were permitted to take photos, allow me to share my experience with you via amateurish and crooked shots. This is: 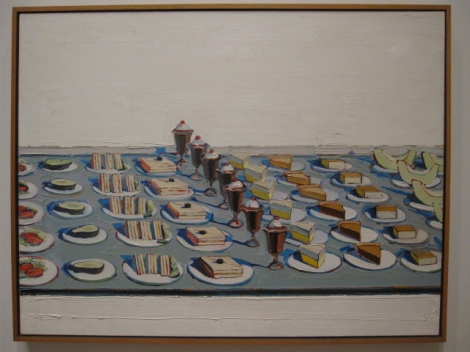 A little closer, there is a distinct ridge between the wall and the counter:

Zooming in, even the countertop crackles with movement that I never noticed in reproductions:

The avocado pit almost looks like a literal depression in the paint:

And these little servings of cake look as though they were iced with a legit pastry spatula:

If you enjoyed these, and if I know you and have your home address, let me know if you’d like me to send you one of those Thiebaud postcards.

7 responses to “Up close with Thiebaud”