I recently came across this witticism in my reading:

“A highbrow is the kind of person who looks at a sausage and thinks of Picasso.”–A. P. Herbert

The context is “Trott v. Tulip: Is ‘Highbrow’ Libellous?”, one of the fictional legal cases in A. P. Herbert’s Uncommon Law (1935), intended to poke fun at weird loopholes in the British legal system. In this case, the plaintiff is a writer of lurid detective fiction who accuses a book reviewer of libel because the latter suggested that her novels were furtively highbrow. The so-called expert witnesses are called in to testify that despite the word’s ostensibly complimentary denotation, it possessed a negative and possibly reputation-damaging connotation. The counsel gets more than he bargained for when the witnesses ramble on about the gendered, ethnic, and classed connotations of “highbrow”: one makes the provocative claim that a highbrow author is one that you can’t seriously imagine astride a horse. Witness Haddock, a stock character of Herbert’s, provides this colorful explanation:

COUNSEL: Have you been called a highbrow, Mr. Haddock?
WITNESS: Once.
COUNSEL: And you resented it?
WITNESS: Bitterly.
COUNSEL: Can you give us any idea of what you mean by a highbrow?
WITNESS: A highbrow is the kind of person who looks at a sausage and thinks of Picasso. She thinks life is nothing but a frame for art. You cannot talk to her about the weather. She has no soul for detective stories. She cannot swim. She reads in the bath. She ‑‑
COUNSEL: One moment, Mr. Haddock ‑‑
WITNESS: She quotes French writers at breakfast. She has just read a book which you have not. She tells you so. She cannot understand the attraction of chorus girls. She would rather her daughters were brainy than beautiful. She has no sense of humour.
COUNSEL: But. Mr. Haddock ‑‑ ?
WITNESS: Wit, sometimes, but no humour. She knows too much. She talks too much. She takes no exercise. She does not care if it snows. She drinks too much coffee. She does not care for the Colonies. Her soul is in Florence. She cannot cook. She would be at a loss in a conversation with a bookmaker.

The counsel leads the witness to admit that he things that highbrow-ness is a peculiarly feminine trait, even when expressed by men.

I’m not familiar enough with Herbert’s writing to speak to the level of satire here, but I do find it remarkable how little has changed in the way we conceive of the highbrow–like the “elite” and the “foodie,” a highbrow possesses admirable resources (taste, leisure, manners, money) but a despicable lack of admirable qualities (fortitude, vitality, appetite) which coincidentally overlap with qualities that are gendered masculine in a culture that privileges masculinity (i.e. ours). Also interesting to note: in Mr. Haddock’s imagination, literary elitism manifests bodily as a lack of healthy appetite. A respectable non-highbrow author–the kind of author you could imagine astride a horse without giggling–would look at a sausage and see a sausage, like any redblooded man.

Of course the first thing I thought of when I read the Picasso line is this silly sausage series by photographer Karsten Wegener and food stylist Raik Holst:

If you’re familiar with Jeff Koons, you’ll recognize that right away; they nailed it. Some of the photos are less on-the-nose, more interpretive–like this one, which recasts Picasso’s “Paloma” (or peace dove) as a skewered chicken. 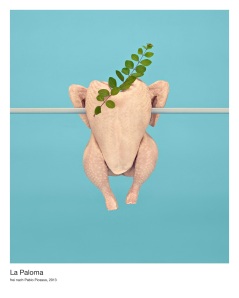 As I’ve observed about many similarly playful images, these stylized meat photos tease the boundary between art and the sublunary applications of art–culinary presentation, advertising, parody. Highbrow/lowbrow. Recognizable as his work may be, Jeff Koons is an artist of already controversial standing in the art world–as is Damien Hirst, who gets several sausage mock-ups in this series. How seriously can we take their artwork when we see it rendered in slick, overstuffed hot dog casings?

Apologies, vegetarians. If this is too much of a sausagefest for you, please enjoy this Kandinsky salad courtesy of NPR’s The Salt:

One response to “Quick hit: Seeing Picasso in a sausage”