Like many bookish people, I have a real weakness for rare and obscure words, words with unusual etymologies, and words that were totally common and sensible in a different period of history but are no longer useful and relevant: linguistic curios which I’d like to use but are probably better left behind glass. For example, who knew there was a word for sour milk that has more syllables and Scrabble points than “sour milk”? (oxygal, noun.)  I also love foodcentric figurative language and other idiomatic oddities; I don’t think I even knew what a rhubarb was until college, but now I’m surprised that none of the high school teachers in my free summertime theater camps ever told us to do so. (rhubarb, verb, To mumble words and phrases in the manner of actors in a crowd scene).

I’ve been keeping an ongoing list since my last obscure food words post (focusing on etymologies besides gastro- and -vore), but the list, while not long, just got too unruly for one post or even several. What could I group with the delightful word jirble (verb, to pour a liquid with an unsteady hand)? How to categorize nutting, a wonderfully flexible word with multiple meanings in various English-speaking nations? Since I do not wish to include all nine hundred variations of fortune-telling that uses foodstuffs, how could I choose between alectryomancy (interpreting patterns in how a rooster pecks at grains) or tyromancy (divining the future from the coagulation of cheese)? So I had to capitulate to my collectors’ urge and make it a background feature of the site: Alimentary Lexicon, an assortment of unusual or obscure food words and (not so much obscure as figurative or regional) food idioms. This will be updated as discoveries are made. Except for the -omancies, which are amply covered by the Phrontistery and will not be included at all. 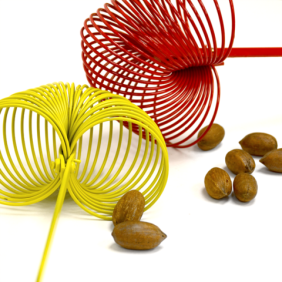 This is how you pick a peck of pecans when you go a-nutting. Image from the Paris Texas Pecan Company.