This week we got: celeriac root, cilantro, a head of lettuce as well as spicy greens mix, an onion, some Yukon gold potatoes, a garlic,  green beans, collards,  a cauliflower, and an eggplant. I bought peaches (the very last of the season!), pears, and apples from a market near my office. No pic–I didn’t do the pickup this week, and forgot to take a snap before unpacking my half. Instead, here is a picture of half a celeriac. 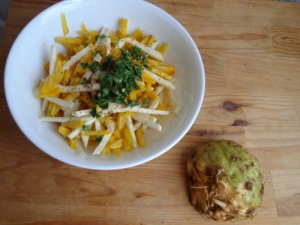 Celeriac is one of those things you might not encounter unless someone drops one in your CSA box. Texture-wise, it’s like a slightly spongey jicama–not awesome to eat in large chunks, in my opinion–and it smells and tastes strongly of celery. I prefer to think of it more as a seasoning than a vegetable, mincing it up for soup base or blending it into mashed potatoes. Sometimes, if we have lots of other roots to use up in this way, we chop it up and roast it underneath a chicken so that it fries in the cooking chicken’s juices. This week, as you see, we chopped it into matchsticks and tossed it with golden beet matchsticks and this citrusy dressing, from Martha Stewart.

The end of the work week was hectic for me, although happily interspersed with meals with friends. Between eating out and eating leftovers, I didn’t really need to use anything in my share until Saturday, when I worked on the enormous amount of leafy greens we had. I already had cucumber and radishes, but picked up some avocado and sauteed some turkey breast to make it a meal. I pretty much ate salad all weekend until Sunday evening, when I was planning on having some friends over and providing a seasonal buffet without expending too much effort on production or money on extra ingredients.

The theoretical occasional of this gathering was to celebrate the changing of the seasons–it was so chilly during the last week of September! But it was so hot the first week of October! Sunday was disgustingly close and humid.  And yet, I mulled cider and wine (which we drank most of, when we weren’t guzzling water, iced tea, and cold wine). We roasted potato wedges and broccoli and carrots (the latter of which was brought by a friend. We made eggplant chips and baked cauliflower with parmesan cheese on top. I popped popcorn and warmed crusty bread to be eaten with butter and the delicious tomato chutney we made last week, and opened up one jar of mixed pickles from our canstravaganza this summer and one jar of beet pickles from last summer that was still good.

This is just the beginning!

And we ate all of it. Fortunately, several friends had brought more vegetables, so we roasted more cauliflower, simmered some kale and mustard greens with tomatoes and wine, sauteed green beans in sesame oil, and popped more popcorn. The we ate all of that too.

Then there were the cakes. My gentleman friend had given me a bag of golden and red beets some time ago, and we hadn’t gotten around to eating them since I tend to reach beet capacity very quickly. I do like golden beets–they’re more mild in flavor than their red cousins–and they were pretty delicious in the raw slaw (above) and also roasted into chips alongside the eggplant. (The golden beet chips were very sweet, even with no seasoning aside from salt and olive oil.) But the red beets vanished into a chocolate cake, never to be seen again (except for one lump I didn’t quite blend enough). I was slightly short of the amount of pureed beet recommended by Martha Stewart , so at my neighbor’s suggestion I added a few spoonfuls of yogurt. The cake nearly rose right out of its pan, but it was lovely and rich and moist, just as a chocolate cake ought to be.  My neighbor made an apple cake (I think from a Smitten Kitchen recipe?), which ended up going into two cake rounds due to our lack of a bundt pan, and those were also incredibly tender and creamy and perfect.

Somehow, we didn’t eat all of the cakes at once, which is probably for the best–not least because I’ve been enjoying them since.

Then the day after our hot, humid Sunday autumn festival, the temperature dropped dramatically down again–just in time for me to finish up the remainder of the cold salad, cold slaw, and cold pickles. And takeout, I’ll freely admit. The sole survivor of this week’s offering was the collards, but I figured they could wait until Wednesday when my neighbor and I could team up to cook them.