This week we got: six ears of corn, a big onion, red bell peppers, miscellaneous hierloom and roma tomatoes, green beans, an eggplant, some lacinato kale, a butternut squash, and a bunch of thyme. I was surprised to see squash so early, but it’s ready to harvest now; the squash we see later in the fall has been cured so that it can be stored for the winter months. 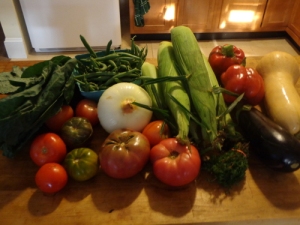 On Wednesday, my gentleman friend and I toasted the corn in a skillet with some garlic, jalapenos, and vegan chorizo, then let them simmer with a bunch of tomatoes and rice and beans. It was pretty similar to dinners we’ve made before, but stewing everything together like that created a more chili-like bowl of vegetables and proteins, just enough of a difference to feel new. Besides, leaving them in the pot to mingle and marry allowed us to execute a whirlwind of other kitchen tasks:  we whipped up some muffins with a zucchini I bought at Reading Terminal last week, blended some gin cocktails with part of a watermelon he picked up at the market, and simmered ginger into a simple syrup I’ll keep around for cocktail mixing. 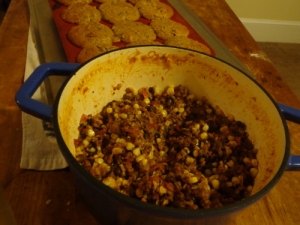 Vegan chorizo is pretty tasty. We smothered our chili with cheese and took several helpings each.

Thursday night was for household maintenance. I didn’t make it to the market this week either–too slow in my boot–but during last week’s Reading Terminal visit, I bought a bunch of plums as well as some vegetables that aren’t really native to midsummer–bok choy and leek–because I’ve had a hankering for stirfry with plum sauce. There are lots of different ways to make plum sauce–I like mine with a lot of soy for dinner purposes, but usually it’s a lot lighter and sweeter, for dipping purposes. I cut up two very ripe black plums and boiled them with a little water and some chunks of ginger, adding red chili garlic sauce, black pepper, rice vinegar, and soy when the plums started to mush like applesauce. Two plums and the other liquids filled up my now-empty soy sauce bottle.
While the rice was cooking and the plum sauce was simmering, I prepped the kale for a salad–I’ve read you can leave kale to soak in salad dressing for a few days, and it only improves the flavor. By the time the kale was put away and the dishes washed, the sauce and rice were close enough to finished that I could toss the bok choi and leek into a wok with green beans and carrots from last week.

The kale salad did get more tender but also a little more bitter–possibly due to the vinegar I used as dressing?–but still made a nice accompaniment as I finished up last week’s beet soup on Friday and Saturday. I was still on a clean-up-and-out kick, so I also worked on using up old ingredients on those days: I wedged and roasted some potatoes, and made fritters out of plain coucous I’d made for tagine last week and not finished. (The thyme went very nicely in these.)

On Sunday, my neighbor came over to squeeze a whirlwind cookathon into a brief window in what has been a busy week for her. To start: we both had piles of plums from various markets, most of which were not at their best since we’d already eaten the good ones. We sliced and pitted the plums in short order, dumping them all into my slow cooker and ignored them for the next few hours.
Then we peeled and chopped an enormous amount of vegetables: tomatoes galore, eggplant, zucchini squash, green beans, butternut squash, and kale. It’s a little hard to explain what happened next and in what order–we were very busy and talking the whole time–but somehow, within two hours, we had a big blue pot full of creamy risotto with butternut squash, green beans, and tomatoes. 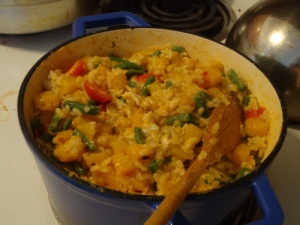 We also had a pot full of fettuccine noodles and a ragout of tomatoes, eggplant, zucchini squash, and kale. Thyme, which is my favorite herb even though it is a proper pain to de-stem and chop, was sprinkled liberally in both dishes. And at the end of it all, after a quick spin with the immersion blender, we also had a pot full of plum sauce with a warm, spicy, lovely flavor even though we added absolutely nothing to it. Some of this might be mixed into a stir fry sauce like I made earlier in the week, but some of it we’ll eat in yogurt and some will be baked into muffins.

Also, you should know that this happened: 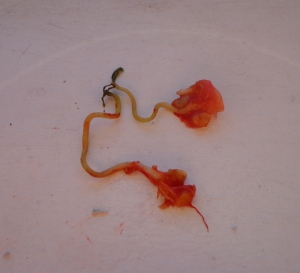 These little sprouts were simply growing INSIDE of two separate tomatoes. I’ve never seen that happen before, but I am told that this phenomenon is called vivipary. I have the sprouts in some seed soil in the safety of my IKEA greenhouse, where they can’t be nibbled by cats, but they are not thriving outside of the inside of their mother tomatoes. It’s an odd week that hath both tomato sproutlings and autumn squashes in it.

On Tuesday, the gentleman and I made a gigantic pot of eggplant lentil curry–similar to the one we had a few weeks ago–out of an enormous eggplant and some tomatoes he salvaged from his own house’s CSA. The eggplant was so big it just barely fit in my blue cast iron pot until it cooked down a bit, but eventually we had a great spicy, coconutty, eggplanty stew. I have more leftovers this week than I can legitimately eat before flying out for Labor Day weekend, but that’s what freezers are for. So it goes.