This week we got: tomatoes (mostly romas with some gorgeous heirlooms), six ears of corn (cornstravangza begins!), beets, a garlic head, an onion, a jalapeno, a bell pepper, and lacinato or dinosaur kale (with the broad flat leaves).  Some of this was unexpected–the corn and kale were “maybes” when our famer sent our weekly Email, and he thought we might have green beans but we didn’t. We think weather has been causing this changing menu, which is a bit more uncertain than usual; a month of rain followed by some blistering hot days followed by some flooding? The plants aren’t thrilled, but the pests are.

All the same, we are getting a ton of great vegetables, and we are making a ton of food with them. At the market, I bought extra tomatoes (because it’s tomato TIME), yellow peaches, sugar plums, blueberries, and a handful of blackberries that I ate right at the market.

To be honest, on Wednesday, my neighbor and I were still beat from a couple of hectic weeks in a row. All the same, we talked ourselves into a big cookathon. We salted and drained our big nose-having eggplant, and melted it into a giant curry with old chard, beet greens, lentils, loads of tomato, and coconut milk. We followed this recipe almost exactly and although I’d probably choose to use less garam masala next time, it was great. We also chopped last week’s fairytale eggplants, golden zucchini, and a great deal of tomatoes for another skillet ratatouille. We meant to put last week’s kale and the rest of the beet greens in there, too, but there was simply no room in the pan, so we cooked the greens in a wok with garlic and little else. 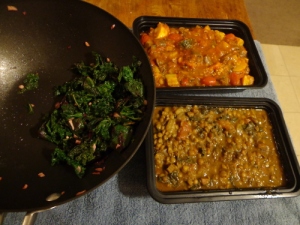 Once we got moving, it felt good and normal (if tiring) to be cooking. And it’s nice to look at your work at the end of an evening, all packaged up for future meals.

On Friday, the gentleman friend and I went to First Friday in Old City to look at art, admire sidewalk shops, and try out a cocktail at Art in the Age. When we got back it was almost 9, but we got busy cutting corn off the cob and slicing the hierloom grape tomatoes from the market. It didn’t take to long to throw them together with Wednesday’s greens, the jalapeno, and some rice and beans.

Like so many of the dishes we’ve been making this month, this rainbow of vegetables tasted the way it looked: bright and sweet. If you had asked me five years ago how to describe the vegetables I cooked, sweet would probably not have been a word I used. To my mind, fruits were sweet and vegetables were savory. And of course, corn and tomatoes and eggplants and beans do have that elusive fifth taste, savoriness, but they are also fruits (well, or legumes), and when they are at the peak of their seasons they are indeed sweet.

Monday, I decided to turn the lacinato kale into a salad. I’ve actually never made kale salad before, mostly because it’s unusual for me to have kale and not also have lettuce–we get a lot of both in spring and fall, so all my salad needs are more than met. Kale packs a lot more flavor than most lettuces–best to keep it simple–and the leaves need to be tenderized to be to be eaten raw. I looked at a few recipes but I liked this enthusiastic post on Lucky Penny Blog (though I disagree with their needless prejudice against curly kale). I ate mine with the remainder of the cucumber and one of the romas. I’m pleased to have a lot of romas and one heirloom left. If I buy a few extra tomatoes every week while they’re good, maybe I’ll be forced to put up some tomato sauce. I see no problem with making sauces on the spot from canned or grocery store tomatoes during the winter, but. . . the local fruits are just so good right now.

You’ll notice that we didn’t get to the beets this week. Oh, beets. I wish I loved them more. Perhaps inspiration will strike and we’ll make something irresistible with them next week.