This week at Table Matters, I have a piece up about vanitas paintings, particular those that involve food, and how they try to have it both ways: these beautiful, sumptous, appetizing paintings chastise the viewer for his or her visual or literal appetite with imagery that recalls the passage of time, the shortness of life, and the inevitability of death. I compared these paintings to today’s zombie films. The article was a lot of fun to write!

I’ve loved Dutch vanitas paintings for a long time, a love strengthened and deepened by Mark Doty’s Still life with Oysters and Lemon (mentioned in an earlier post), but oddly enough I was introduced to vanitas by a more contemporary vision:

Flack invokes some of the stock symbolism of Dutch vanitas paintings: the pocketwatch ticking away the hours; the candle burning down; the sands slipping through the hourglass. But these objects are grouped with the accoutrements of feminine display: cosmetics, jewelry, mirrors. Everything is slick and shiny; unlike the shimmering oil-paint depths of Dutch paintings, Flack’s objects reflect an impenetrable and impossibly glossy surface. There’s fruit here, some of it opened, but none of it looks ready to eat: alongside the cosmetics and the other labial imagery (the opened rose, the rippling silk) the fruit complements the overall impression of laquered, designed, but necessarily mortal femininity. Stumbling across this painting as an undergrad, I was impressed by the hyperrealistic saturated colors and the careful symbolism before I knew how it conversed with the vanitas traditions.

Speaking of stumbling–and fruit, and death–I came across these photographs by Dimitri Tsykalov while googling images of fruit and skulls for my TM piece.

Rather than presenting a beautiful, shimmering tableau of fruit and then shadowing it with hints of death and decay, this painting presents the fruit itself as memento mori. This is one of the more horrifying compositions of his skull series, in my opinion: the macabre arrangement of the stacked cairn of rotting “skulls” outweighs the whimsically candy-colored watermelon. But the tension between pleasure and the threat of decay is still present here, and the artist seems to be experimenting with the playful-to-macabre ratio throughout this series: other compositions strike quite different notes on the macabre scale. Some less rather than more: 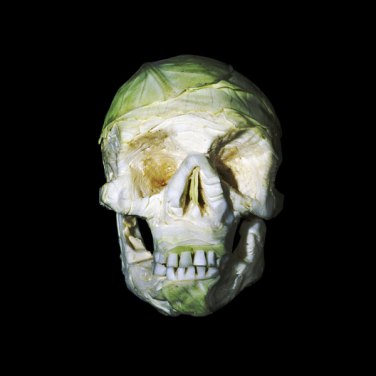 This carved cabbage uncannily resembles bone, and this is a fairly realistic rendering of a skull. But its leafy layers and tight little cabbage-leaf skullcap just kill me (ha!). As with the portraits made of food, there’s something inherently whimsical and humorous about art made out of foodstuff. But one of the very reasons food and cooking is so low on the aesthetic totem pole is its temporality: the reminder is always present, even under the sense-dulling stirring of appetite, that good things in life do not last.