When we epicureans and food culturists talk about food, we’re not really interested in talking about digestion. While other bodily mechanisms may be considered fascinating or elegant–the runner’s fine machine of bone and muscle; the miraculous science of the eye–digestion is a little too coarse, a little gross to talk about it. The parts of digestion that feel good–savoring a taste on the tongue, feeling warmth spread in the belly–are general, almost abstract sensations, and we might discuss them without getting too specific, often alluding to emotions rather than sensations (a happy belly, a heavenly taste).  Meanwhile, the specific and localized feelings of the stomach’s peristalsis or the intestine’s gurgling usually portend digestive stress.

How much more pleasant it is to consider the process of digestion with Steven McGaughey‘s pastel subway map!

McGaughey, a medical student with a passion for design, notes that the map was a pedagogical tool as well as a design experiment: “In my experience learning anatomy revolves more on vessels and organs relationship to each other, rather than a more realistic visualization. The gastric subway is a playful project to experiment on how I best learn.”

Elsewhere in med school, an MRI technologist has been testing the image resolution of a research-only MRI by scanning fruits and vegetables: 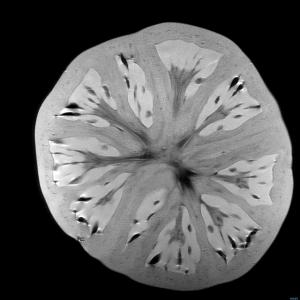 Most of my food research is spent nose-deep in abstract philosophical considerations of what’s considered ethical and what’s considered delicious and, sometimes, what’s considered food; it’s great fun for me to have a glimpse of how practitioners of a more physical science see and think about food and eating. As another example of this: I was recently talking with two members of a technology lab who have been working on a food-related robot (more on this to come). I asked them to describe the food product to me, and they began to explain how the robot worked. “But what was the food like?” I asked. I wanted to know how it tasted and what its texture was. But I wasn’t specific enough, and the tech lab guys began to explain what it was made of.