While waiting for my bus in the morning, I noticed a number of city buses were wearing this advertisement on their sides: 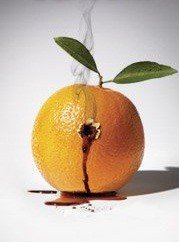 My websearch turned up a great many more variations of this with a knife stuck in the bleeding orange, but the bullet-wound orange is currently the pervasive image for Philadelphia city walkers.  It’s violence made appealing – not just by virtue of the glossy saturated colors and the eye-catching special effects.  The orange itself can’t help but appear appetizing, despite bleeding and smoking (in an aesthetically pleasing pattern).  One may experience revulsion upon seeing this advertisement (or boredom, in my case: yawn, another sexy death show), but the image is designed to stimulate the visual appetite.

Fruit is an easy effigy to represent violence to human bodies: it is soft and vulnerable like ourselves, but safely nonsentient – and tasty!  The orange brought to mind the yearly Bastille Day festival in Philadelphia, in which the decapitation of Marie Antoinette is represented by slicing a watermelon on a makeshift guillotine.  It usually makes a satisfactory thud and explosion of juice, and then the halved watermelon is held up in playful triumph.  To generalize grossly (ha!), it would seem that placing fruit to refer to and replace human bodies has the effect of tipping a violent scene toward playful or sexy.

Over time, I expect to add further examples (or counterexamples!) of “harmlessly” violent food imagery.

Additionally: as I was compiling this post, Sociological Images posted some images of food arranged to stand in for human sexual parts.  As in the gunshot orange image, the brightly colored and inoffensively nonsentient food seemed to create a playful image rather than a threatening or degrading one. . . a difference noted by the SI commenters.